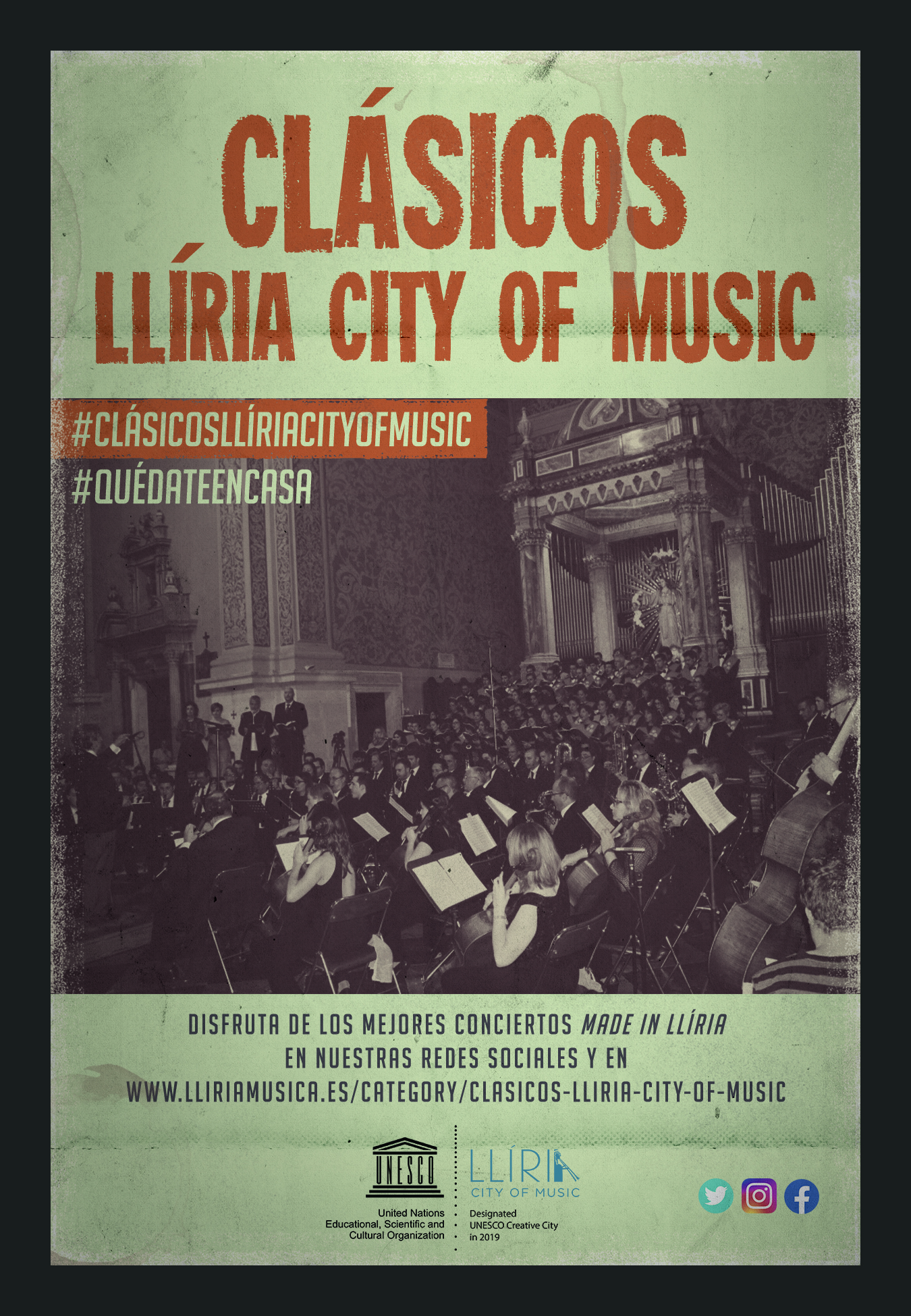 Llíria City of Music provided last weekend the finishing touch of the campaign #LlíriaCityOfMusicClassics, an initiative that, since April 5, has been taking to every music lover home a total of 44 concerts ‘Made in Llíria’. As an outstanding conclusion, in the last 48 hours two magnificent musical events have come to light. On Saturday, the final concert “A tres bandes” was broadcasted through YouTube, which had previously been celebrated at the theatre of the Unió Musical, and in which the host organization together with the Artística de Buñol and the Ateneu Musical de Cullera participated. On Sunday, the interpretation of the zarzuela “La del manojo de rosas”, framed within the celebration of the Bicentenary of the Banda Primitiva.

During almost two months, the Creative City of Music has daily livened the confinement up through a carefully chosen performances from all the entities of the municipality: Unió Musical, Banda Primitiva, Banda UDP, Orquesta de Plectro ‘El Micalet’, the Agrupación Musical Edetana “Vicente Giménez”, the Grup de Danses i Rondalla ‘El Tossal’ and, indeed, the Conservatorio Musical. All of them have been an essential part of the campaign with the selection of their best repertoire and its making available to the great audience.

Through social networks (Twitter, Facebook and Instagram) videos of the best interpretations of recent years have been offered, which remain in the official website of Llíria City of Music open to the public: http://www.lliriamusica.es/category/clasicos-lliria-city-of-music/

Some of these publications have been made available for the first time to the music fans and freely accessible. The Unió Musical has contributed with a selection of 15 concerts in audiovisual format of high quality, featured by its Banda Sinfónica, Orquesta Sinfónica, Banda Juvenil, Orquestra Jove and Cor Social. Among them, it may be highlighted the participation of the Banda Sinfónica in the Certamen de Altea in 2019 and of the Orquesta Sinfónica in the contest by Bankia this very 2020.

The Banda Primitiva has also made reachable for the public its best repertoire during the last few weeks. Noteworthy among others are the historic concert with its chief conductors, which served as closing ceremony of the bicentenary, and the homage on the part of the Certamen Internacional “Ciutat de València” hosted at the Palau de les Arts Reina Sofia.

Both societies have premiered as well historic documentaries, such as the one starring Zubin Mehta at the Unió, produced in 2013, and the audiovisual about the triumph of the Primitiva in Kerkrade. All of this can be relished through the official YouTube channel of each society and through the website and social networks of Llíria City of Music.

The Conservatori has made available to the great audience its gala “Simply the Best” and the concert “25 Aniversario”. The Banda UDP has altogether contributed with the premiere of its Antología de la Zarzuela, just as the ensembles Vicente Giménez and El Micalet, with a selection of their best repertoire. Likewise, the Grup de Danses i Rondalla ‘El Tossal’ recounted its twentieth anniversary.

Llíria City Council has recovered for the occasion the great municipal concerts from the past years, such as the New Year 2020 Concert “Música per la Pau” and the Festivales de Bandas of 2018 and 2016, as well as the poetry-music show “Dotze Treballs d’Hèrcules” or the renowned festival Desenjazz.

Thus #LlíriaCityOfMusicClassics fulfils one of its objectives as Creative City by UNESCO. For, in these difficult times, the power of culture and creativity is useful to share with the world citizens exclusive content of our musicians, helping so to overcome the challenge that the society is facing today. At the same time, a magnificent digital compilation with the best local interpretations has successfully been created, which reinforces Llíria’s creative label at an international level through the wonderful media focus provided by UNESCO.