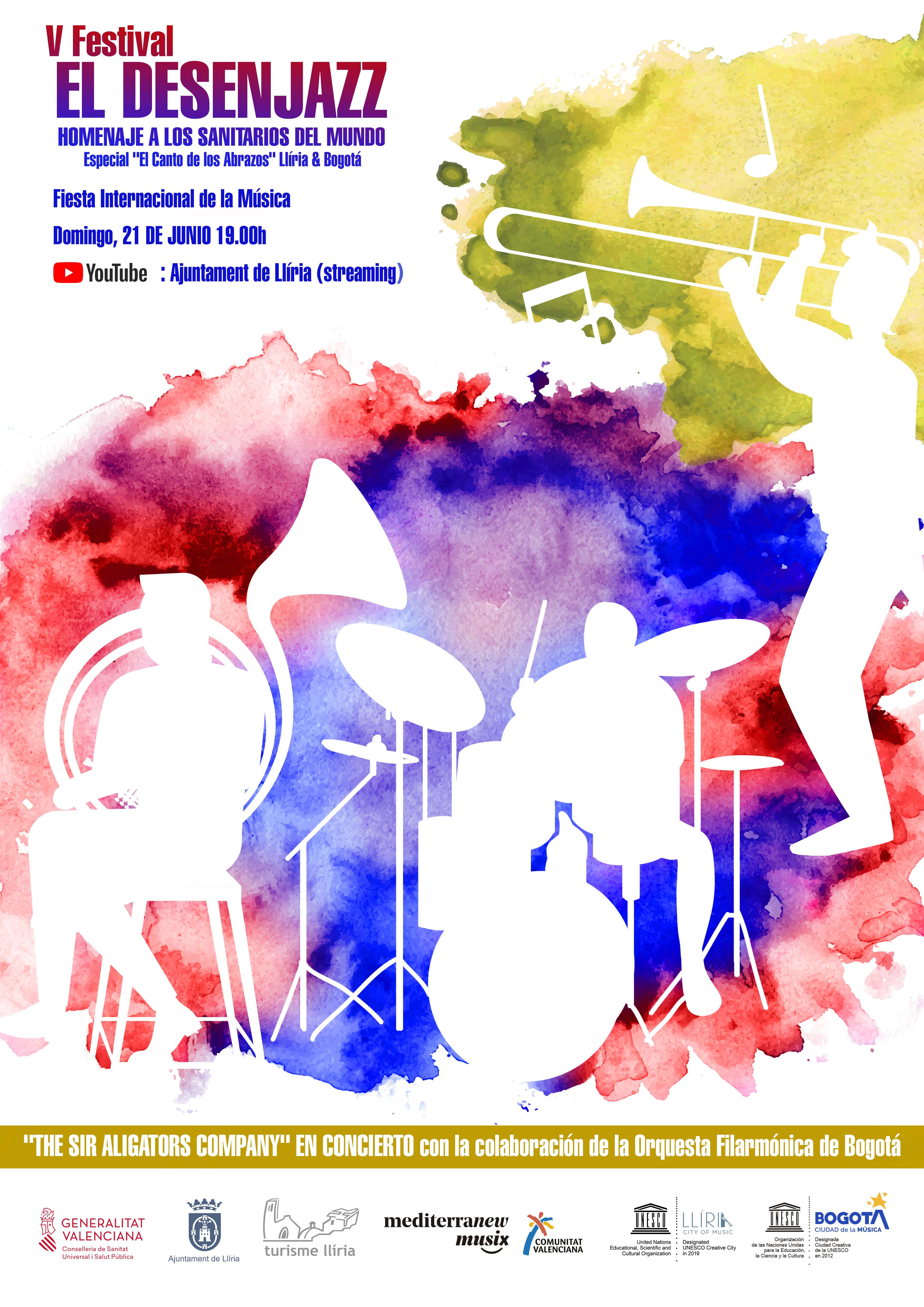 Llíria will join the commemoration of the International Music Festival with the celebration of the 5th Festival ‘El DesenJazz’, featured by the group The Sir Aligator’s Company, and once again with the support of Turisme Comunitat Valenciana through the Mediterranew Musix brand.

Once more, as UNESCO Creative City, Llíria promotes innovation and creativity between different cultures. In this occasion, there has been cooperation with the prestigious Bogotá Philharmonic Orchestra through its general conductor David García.

The distinguished Colombian maestro and composer Francisco Zumaqué, author of ‘El Canto de los Abrazos’, has been working during the last few weeks from a distance with the local musicians of The Sir Aligator’s Company in order to create a special musical adaptation of his work for the event.

Bogotá, a Creative City of Music as well, with its nearly eight million inhabitants, joins Llíria with a symbolic musical and caring embrace as a tribute to the health professionals that are fighting against this pandemic. Through the whole sector of culture, art and sport, the capital of Colombia virtually engages with Llíria by organizing and promoting together a moving musical spectacle, which will be followed live across the ocean via YouTube. This event shall act as encouragement and hope for a people, the Colombian people, who are still suffering these days the serious consequences of Covid-19.

The Sir Aligator’s Company will perform at this Festival ‘El DesenJazz’ 2020, in an edition equally full of great symbolism in many ways. This formation ought to have performed in Llíria last April 30 on the occasion of the International Jazz Day. Besides, music with audience returns to local theatres, since this time the stage of the Banda Primitiva will host this concert, taking all necessary security measures.

Additionally, through this project, the Llíria City Council and Turisme Comunitat Valenciana place value on music as a touristic resource, a sector that has been very much affected by the coronavirus crisis.

Entrance with prior reservation

The V Festival ‘El DesenJazz’ is held in this auditorium next Sunday, June 21 at 7 p.m., a day in which the Music Festival is celebrated all over the world. There is limited capacity, the use of mask will be mandatory in order to access, and invitations can be booked in the App of Llíria City Council. It will also be streamed through the municipal YouTube channel.

The Sir Aligator’s Company has been approaching rock, pop, jazz and soul from its classical formation. Trombones and tubas utterly change their traditional role so as to adapt pieces from various musical styles. This group has performed throughout the Spanish territory and has already recorded three albums.