Llíria, lead character in the musical ‘Vuelta al Mundo’ as a tribute to Beethoven 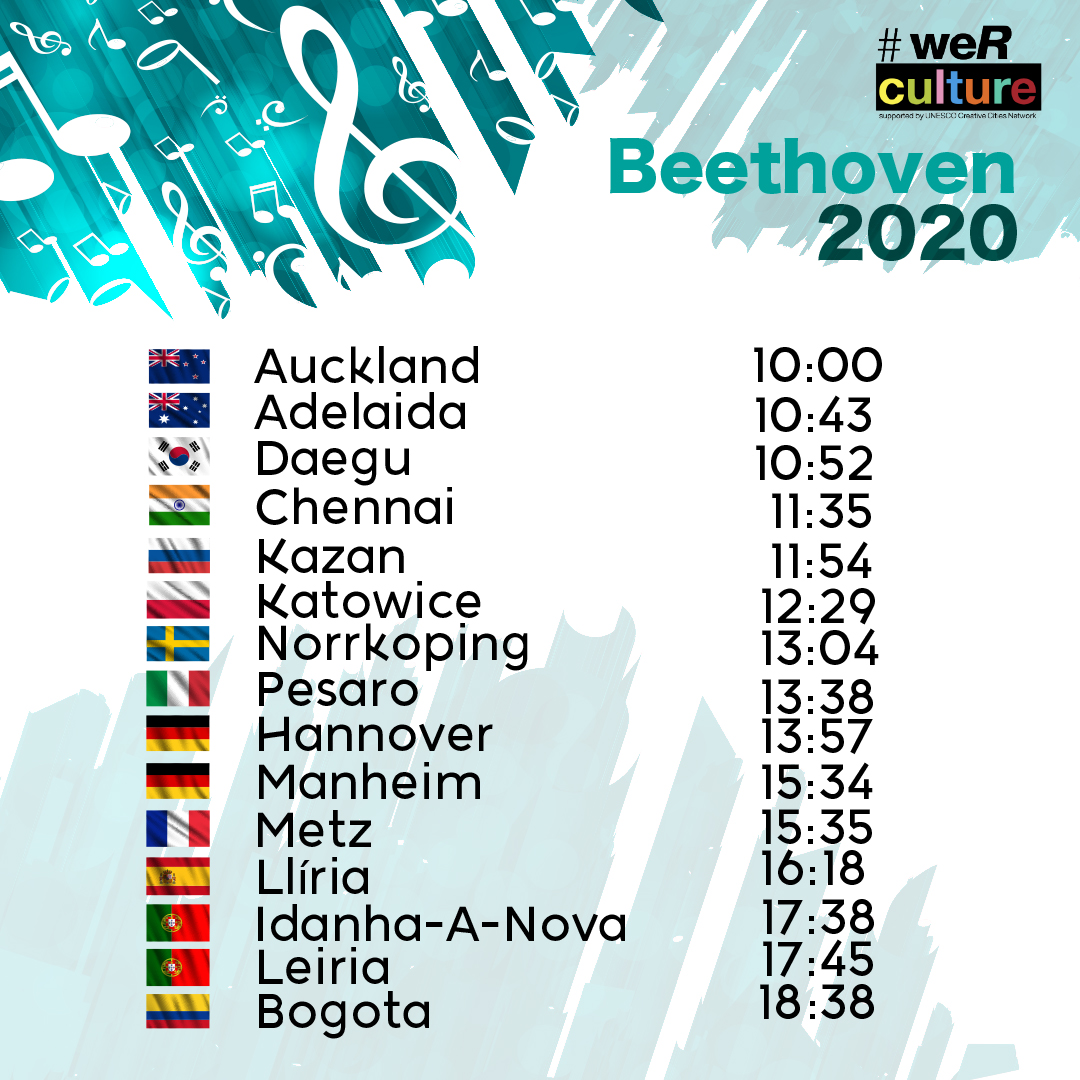 Llíria City of Music will participate this Thursday in one of the most creative and ambitious tributes ever made to the figure of Ludwig van Beethoven, one of the most important composers in the West. On the occasion of the 250th Anniversary of his coming into the world in Bonn, Germany, 15 cities belonging to the UNESCO Creative Cities Network have joined in an innovative solidarity online festival, which will pay tribute to this universal musician with interpretations from the five continents for more than eight hours uninterrupted.

Llíria will offer the rebroadcasting of the world premiere in 2016 of the interpretation of the Ninth Symphony in its version for soloists, choir and wind orchestra, composed by maestro Juan Vicente Mas Quiles. The Banda Primitiva and the Unió Musical de Llíria, two of the oldest and most prestigious non-professional bands in Spain, joined forces under the baton of the prestigious Edetanian conductor Manuel Galduf, offering thus an unforgettable recital in a magical setting and with special acoustics, that is the Arciprestal Church of the Asunción de Llíria, dating back to the 17th century. This concert will reach a global dimension tomorrow by being integrated into the macro-tribute to Beethoven carried out by the UNESCO Creative Cities Network, of which Llíria has been an active part since October 31, 2019.

In light of the worsening of the pandemic in many parts of the planet, this great event is proposed as an act of solidarity with artists and components of the cultural industry, as well as a message of resilience for all those music lovers who, due to health restrictions, cannot deservedly enjoy in person such a special day in the history of music.

The international festival has been promoted from Mannheim (Germany) and Katowice (Poland). Llíria has been invited on the grounds of its organization of the first international tribute made to Beethoven so far this year 2020: “Windows of Music and Hope”. On March 26, during the worst moments of the global pandemic, the social networks of Llíria City of Music managed to gather musicians from different cities to launch a message of unity and hope from their balconies. The initiative had a huge impact and was recently praised in Beijing by the Director-General of UNESCO Audrey Azoulay.

This great musical “Vuelta al mundo”, in which each city will offer its own musical interpretation of Beethoven, can be followed online for free via the digital channels of Llíria City of Music, from 10:00 a.m. (Spanish time) next Thursday, December 17. It will start at our antipodes, with the participation of Auckland (New Zealand) and Adelaide (Australia). From there, we will travel to Daegu (South Korea), Chennai (India) and Kazan (Russia). The arrival at Katowice (Poland) is scheduled at 12:30 p.m. and from there to Norrköping (Sweden), Pesaro (Italy), Hannover and Manheim (Germany) and Metz (France). The start of the concert of Llíria is scheduled at 4:18 p.m., lasting 1 hour and 19 minutes, the second longest concert of this musical marathon. Idanha-A-Nova and Leira (Portugal) will be the next and Bogotá, on the other side of the Atlantic, will mark the end of an unforgettable day at 6:38 p.m.