The Banda Primitiva and the Unió Musical, for the first time together under the UNESCO label, will offer a unique audiovisual show in streaming 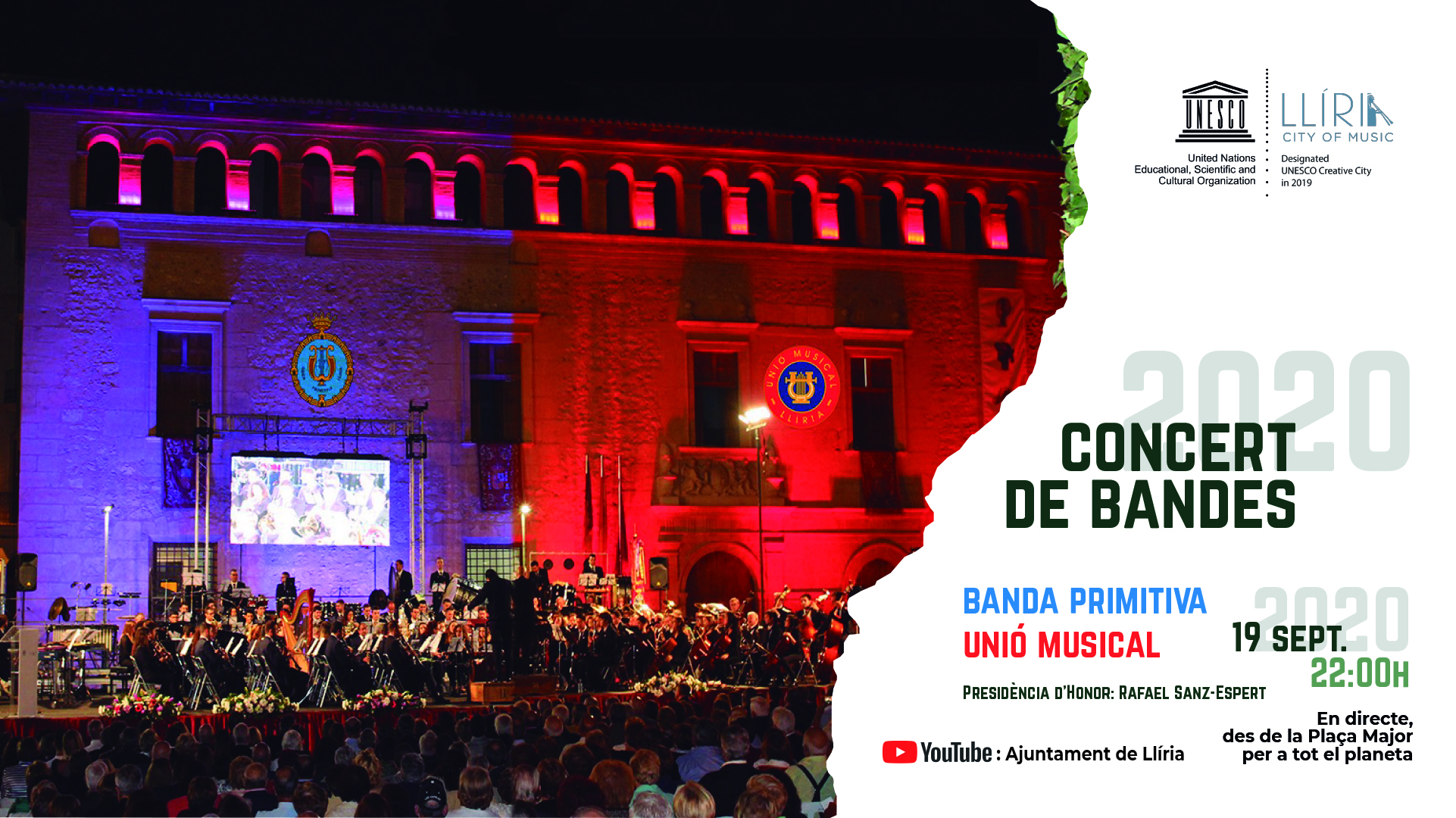 Llíria’s traditional Concert of the Bands will be held next Saturday, September 19, and it will be developed in an innovative format to comply with health restrictions. The festival featuring the prestigious musical societies of the town, the Banda Primitiva and the Unió Musical, will be held, in this edition, without an audience but it will be possible to follow it live, with a significant television production, through the YouTube channel of the Edetanian City Council.

In this sense, the Councillor for Music, Pedro Vicente, explained that the present circumstances “have led us, with the consensus of the societies and their artistic directors, to adopt this formula, so that the bands can perform with their usual complete formation in a space large enough to meet the distances between musicians and the maximum guarantees of sanitary protection, and thus be able to offer a worthy show as our bands deserve”.

This way, “the Plaza Major will become an extraordinary television set to show the whole world the quality and good work of the formations of Llíria as a Creative City of Music by UNESCO”.

Another novelty that this unconventional Concert of the Bands of 2020 will present is the creation of the Honorary Presidency of the contest. This figure will be represented this year by the director of the Banda Sinfónica Municipal of València, Rafael Sanz-Espert. With this, the Llíria City Council wants to recognize the long and acknowledged career of this maestro in the world of bands.

Sanz-Espert is one of the most dynamic, expressive and representative batons within the international wind music scene, and he is one of the most outstanding, valued and committed conductors of his generation: “It is really a great pleasure, an honour, to be taken into account for such a major event. I have been the main conductor of the Unió Musical de Llíria but I have also conducted the Banda Primitiva in some of their most important concerts, so I have a very good relationship with both societies”, states Sanz-Espert.

Committed to current composers, he has commissioned and conducted premieres of symphonic pieces for band and orchestra. He has moreover received, as conductor, national and international awards and five honourable mentions. He has been titular conductor of the Banda Municipal de Bilbao (2002-2012) and of the Banda Sinfónica Municipal de Madrid (2012-2018) and has also been a member of the WASBE Board of Directors (2009-2015). Currently, he is the artistic director of the Ibero-American Conference of Composers, Arrangers and Conductors of Symphonic Band, a member of the Board of Directors of the Sociedad de Artistas AIE and lead conductor of the Banda Sinfónica Municipal de València. Sanz-Espert knows like few others the value of the distinction that UNESCO has awarded to Llíria, as Creative City of Music: “Llíria is a reference point in the world of music. It is a deserved acknowledgement of work, study and doing things well. Musically speaking, the tree that was planted in Llíria is bearing fruit that is appreciated worldwide. Llíria has musicians all over the world. I have had the opportunity to conduct top-level bands across the world and it is difficult not to find a musician from Llíria. Besides having two groupings of an impressive artistic level, the social atmosphere of their theatres with their cultural programming is unique”.

Screens in theatres and deferred broadcasting in À Punt

The Concert of the Bands can be followed via streaming on Saturday from 10 pm. The performances of the Primitiva, conducted by Javier Enguídanos, and the Unió Musical, under the baton of Pablo Marqués, can also be seen on the giant screens that will be installed in the theatres of the two societies, also complying with the mandatory sanitary measures. The concert will be broadcast deferred by À Punt on a date to be determined, which will be communicated through the municipal channels and the channels of Llíria City of Music.